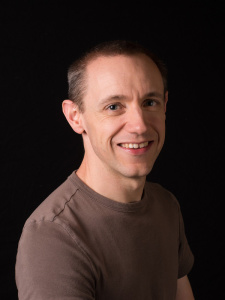 VLAB refers to noteworthy entrepreneurs like Hugo Fiennes as luminaries.

He’s been a serial entrepreneur with histories at both innovative startups and large, well known corporations. Now he leads Electric Imp, a venture-funded startup that enables the internet of things. The path to “noteworthy luminary,” however, is seldom short or easy. Hugo’s path was no exception.

A VLAB correspondent recently caught up with him at his headquarters to flesh out the details of his past, his bootstrapping days, and his 140 hour workweeks at startups gone by.

Tell us about scrappy startups and life back in the UK

When Empeg started and we had an office, I had a two bedroom house. We had seven people there at one point. One guy had to sleep next to the cat’s litter box.

We worked 20 hour days months on end.  The days just kind of rolled from one to the other.  We didn’t go to sleep. When you got up, you kind of rolled through the day and they all wrapped. It was really exciting.

You come up with amazing ideas in the pub and the next day you’d come back and implement it.

You wish you’ve taken more photos of that time. I have got some photos of those times but you have to be there. You couldn’t look at photos at Netscape when it was young and understand them. It’s kind of hard to relate because you kind of had to be there. If you’re not there you just go, ‘Wow, that’s a crowded office, there’s someone sleeping under their desk.’

British culture that I like: I like the pub culture and I like the walking to work – the density of things. You could walk everywhere. You could live close to where you work and there’s loads of bars. We spent probably three to four hours, four nights a week in a pub. At seven o’clock, everyone went over to the pub. And you’d talk about programming things and you’d argue about technology and tech. We’d be drinking and working, and that’s kind of how it was.

So come up with amazing ideas in the pub and the next day you’d come back and implement them. The difference between the UK and here was also probably because of the staff’s ages. I’m sure if you’re in your 20’s in San Francisco, everybody is walking and cycling to work it’s kind of the same. But down in Silicon Valley, come six or seven o’clock everyone goes back to their lives.

How has the “CEO/Founder” experience been different from your more corporate roles?

Loads of ways obviously. The large corporation was Apple. Before Apple, I’d design hardware and software, and write the manuals. Then I’d actually copy software to floppy disks, and print the manuals, and staple them together. I’d do the invoices and charge a credit card and send them out. I’m used to doing everything. So, at Apple, it was, ‘Do hardware. don’t touch anything else, don’t do anything else. We have specialists for that.’

And at Electric Imp?

So the thing is Electric Imp wasn’t the first time I founded something. I kind of knew what I was expecting. In my previous company, I even cleaned the toilets because no one else did. As the CEO I didn’t feel like I could actually impose on anyone to clean the toilet. Someone needs to do it; that’s kind of the thing about start-ups. If you don’t know who’s going to do something, it’s you. Which is not a bad thing because you understand how everything works.

Things I’ve learned in previous start-ups in England… Bank reconciliation: don’t leave it three months. Do it every couple of weeks because you will have forgotten everything and it will be a nightmare of a job. If you do it regularly you’re fine. I did QuickBooks online. I did all the accounts at the beginning because I could. It wasn’t my favorite thing to do, but you get peace of mind when it’s dealt with and dealt with well.

What might surprise a new entrepreneur once they get into the weeds? Do you enjoy working out all the crazy problems involved with starting a business?

I kind of feel like it’s hard for me to give advice because it’s Silicon Valley and there are people who have done this five times in a row. I’m like a newbie.

So starting a business gives you fascinating knowledge like how business processes work. They’re systems that have evolved over time. Bookkeeping goes back to forever; it goes back to stone tablets.

I guess I was lucky enough because my parents started companies. My dad sold shoes back in the 80’s. And then in 1982 he left and started importing Ecco Shoes for Denmark. Before he had an office or a warehouse, our house was the office and the warehouse. Literally, on every flat surface there were some shoeboxes. So I knew some of the stuff, from the fact that the office was in our house. People would come in and they’d be doing invoices and printing stuff out. I was aware of that and it wasn’t frightening to me. Stuff like bank reconciliation is not actually frightening or hard; it’s more that you need to know the value of knowing about it. Even if it’s just so someone doesn’t rip you off.

Yeah I think it’s very good to be in touch with business processes. You know businesses are essentially about money. You’re about products but actually it’s a business. Otherwise it would be a charity or volunteer work. It’s about building something and selling that thing for more than it costs to put together.

Understanding underneath that, is like understanding an operating structure: you know how that works vaguely. You don’t need to know all the details. You can have a bookkeeper who does all the boring bits – the bank reconciliation. You should know what bank reconciliation is. My bank ledger is a system and it should match the ledger in the bank that’s a good thing. When those don’t match you don’t know where the money has gone and that’s a bad thing. That’s kind of important I would say.

Actually, the bigger problem when you’re starting is actually trusting people – delegating to them. The hardest bit is actually letting go of bits of the business and admitting that someone else is going to give them way more concentration and do them way better than you. At the beginning, the whole company is in your head; everything about it is in your head.

Who do you read and what influences you?

Tomaz Tunguz and Geoffrey Yang. I’m awful, I’m pretty untrendy these days but I still use an RSS feed. I have loads of RSS feeds.

I actually just try to read it all every day, but it’s depending on how busy I am. I probably spend about an hour a day. Just knowing at a very high level what’s happening in the market, what start up is doing what, who’s at what show, who’s announcing what. What’s hot in the chip industry right now, what’s getting funded right now. Things like that. It’s just having your finger on the pulse not because it’s your job; it’s because you kind of feel isolated.

Also the Steven Levy book Hackers. I had a very dog-eared copy sometime in the 80’s. Reading it in rural Somerset, that was mind blowing. My dad had actually been to Harvard Business School. He’d been there and he had actually been in Cambridge, Massachusetts at the time this stuff happened.

I don’t read any normal news, I don’t know what’s going on in the world whatsoever, which is probably a very bad thing. My wife reads that news.

What services should startup founders consider creating that would compliment Electric Imp?

There’s lots of things. I’m lucky that there are people mostly doing them already. We specialize in connectivity, we don’t try to do analytics because analytics is a very deep field. We do some pretty graphs. It’s lovely to have pretty graphs, but to put them to actual business use, pretty graphs don’t cut it. You need much more depth. There’s loads of analytics companies that say, ‘Give us your data; we’ll tell you amazing things.’ There are lots of ones like that but there will be probably hundreds.

One of the things we don’t do right now is the professional services part. You can make good money if you offer professional services. But, it will slow you down because you’re looking at many things. It’s like your best engineers are working on getting your top customer’s entire product built for them. It’s good money.

Any final words of advice?

The thing is make sure you’re doing something original. One of the things which is most depressing is if you think you had an amazing idea and then you commit to it- you commit money to it, and time to it- and then you find someone that started two years before. Then you’re working out to differentiate yourself.

‘Pick something original’ is kind of a ridiculous thing to say because everyone thinks they picked something original. Do your research. There could be something else out there and you can’t dismiss it immediately, like, ‘that doesn’t do this or that.’ Think about it from your customer’s point of view.

I think it’s very important to spend a long time Googling. Find stuff out. It could be in a different field but it’s the same product. That’s what reading the blogs do for me. I’ve done that obsessively since RSS feeds came out. You kind of have an idea of what’s going on and where things are going. Just a general awareness.

I did something that actually didn’t go anywhere called snow pilot back in 2003, which was for a computer for snowboarding. It would give you trail maps. We had maps of the resort, your runs, and your times, and your queuing times of lifts. We had all these great ideas what to do with it. But then you see someone else who’s done it right and it’s like, ‘Oh, yeah. They actually did it more right than me.’

Really know what your value is. It’s easy to do the thought process, to have a defensible value proposition I guess without spending any money. With just spending several weeks on Google and reading and search papers, reading blogs, looking at press releases, looking at what big companies do in this area. Trying to work out how to sell it to someone. All that can be done fairly early on.

You kind of wish you’ve taken more photos of it always. I have got some photos of those times but you have to be there.

Many thanks to Hugo and Electric Imp’s communications wizard Tom Sarris. The interview was a pleasure and we at VLAB anticipate your success with enthusiasm.

Be sure to check out our upcoming events…