Attendees of VLAB’s Drone Swarms: The Buzz of the Future event will experience the invasion themselves on Stanford’s campus. 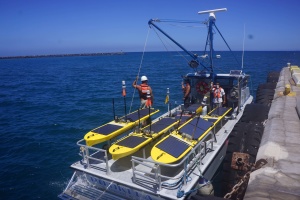 Liquid Robotic SV3 Wave Gliders on their way to launch

A massive change is taking place in the industry with commercial applications of drone swarms. These groups of mostly autonomous, robotic devices are equipped with many sensors that allow them to collaborate to complete complex tasks. Drones can be found in the air, on land, and in the sea, and are operating in ever larger collaborative swarms. They have moved beyond use by amateur photographers who want shots of Apple’s unfinished campus, their neighbors’ backyards or to the dismay of law enforcement, the recent California fires.

Startups and others are developing applications for shipping and warehousing, security, search and rescue, environmental monitoring, and agriculture to name a few. The Association for Unmanned Vehicle Systems International estimates that by 2025 the drone industry will employ 100,000 people and be worth $82 billion globally. Now the venture capitalists and corporations are flocking to invest.

“Drone swarms are great for mapping the world and protecting your stuff,” said Glen Speckert, event chair, VLAB. “But they are beginning to have a mind of their own. They’re mostly autonomous so how do you command them and what happens when something goes wrong. As drones learn to cooperate, the group behavior emerges,” he added. “That’s when life gets interesting.”